According to Wikipedia, the goddess of knowledge, post-mortem examination is “an examination of a corpse in order to determine cause of death”. How fitting… [flashbacks to my legs, suggesting their owner suffered an aggravated assault… with a baseball bat].

Of course, it also refers to post-mortem as “a process, usually performed at the conclusion of a project, to determine and analyze elements of the project that were successful or unsuccessful”. Ok, a little less morbid.

Let’s keep going… “Project post-mortems are intended to inform process improvements which mitigate future risks and to promote iterative best practices. Post-mortems are often considered a key component of, and ongoing precursor to, effective risk management.”
I take a moment to reflect on what effective risk management may mean to an obstacle racer… Considering blog posts with titles such as “five tips on how not to lose an eye during a barb wire crawl”, “how to postpone your need for knee replacements” and “home remedies for obstacle race withdrawal”. Excellent…

As I try to get the Ultra Beast out of my system (stubborn little bugger!), I hope some will find the below helpful, as they try to… you know… mitigate future risks and promote iterative best practices…

Training Before The Ultra Beast

In the couple of months leading up to the Ultra Beast, I started to incorporate one long run as well. I also got rid of flat surfaces altogether. Warm-up? Incline treadmill. Intervals? Stairs. Even with my running workouts, my mantra was “Never just run.” I would stop and do burpees, lunges, pick up a log off the trail and carry it for a while. I’ve also tried to do most of my running on trails, rather than pavement. The weight lifting regimen changed every 4-6 weeks, and was pretty heavy on lunges, deadlifts, and front squats. In retrospect, this worked fairly well, as most of my time was spent on developing strength in the large leg muscles.

One of the best things I could have done getting ready for the UB was running the Toronto Tough Mudder twice. Not only I felt great physically after two laps, it gave me an incredible psychological boost as well. Two laps = roughly 32km. Making the finish line second time in a row, I could definitely see myself power through another 10-12km or so in Vermont.

Two weeks before the Ultra Beast, I ran two races in one day – a trail half marathon in the morning, and a 10k urban obstacle race (which really ended up being a 10k road race) later in the day. This was my last long run.

What I did not work on specifically was speed, and it definitely reflected in how I did in the race. During the race, endurance is never an issue for me. However, I should be able to move faster. My predicted worst case scenario for the first lap was 6 hours (if I rolled an ankle AND ran out of water), and I approached  my drop bin at 5 hours and 15 minutes. Faster long runs would definitely be an area to work on.

Fuel During The Ultra Beast

I feel like my fueling has been right on the ball. I did not bonk at any point, and looking back I do not think I would change anything. I had my regular breakfast of Greek yogurt with fruit and nuts three hours before the start line, coffee (can’t forget coffee!!!) and a gel about fifteen minutes before the start.

Throughout the race, I took in some calories every 40 minutes or so, alternating between energy gels, Cliff bars and mini-boiled potatoes rolled in cajun spice (for salt). Fuel regularly no matter what – this was the lesson learned from hellish Ottawa Beast, where I skipped a gel because I thought we were almost done! As it turned out, I was 1.5 hours away from the finish line, and the last brutal climb broke me.

I also took 3-4 salt pills throughout the day at first signs of cramping. Real meal at the drop bin included chicken breast, sweet potato and hot coffee with milk. I even bummed a cookie off a fellow racer. Mmmmmm… cookie.

Gear During The Ultra Beast

All in all – this was a success. My drop bin was packed well, and, my gear held up. Mostly. 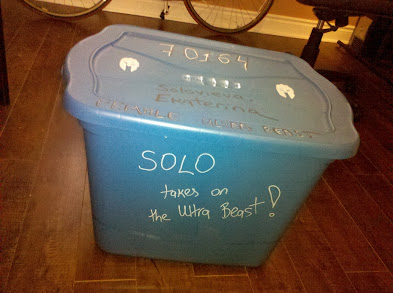 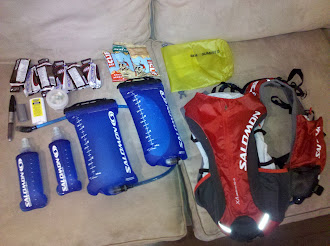 The shoes were amazing, the pants did not rip (hello, Monica!), and the headlamp worked like a charm. I threw on more clothes for the second lap, and again it was a good call, as it did cool down later in the day.

Few things that could definitely be better though. I spent way too much time fumbling with gear. The hydration pack caught on barb wire at least twice, leaving me to wait for the next Spartan gentleman who would untangle me (thanks, Jeff!). The material on this particular model is very light and thin, and something tells me the designers did not have barb wire in mind as they were testing this particular item. It’s pretty shredded.
Scared into fatal dehydration by the Spartan organizers, I also carried two hydration bladders, which was completely unnecessary with two water stations on course. The extra weight undoubtedly slowed me down, and made the pack more awkward to manipulate over and under obstacles.

After a pizza and beer carb fest, we passed out around midnight. I woke up around 5am, and after tossing and turning for half an hour, and waking up everybody else, I finally snuck out. I was in too much pain to sleep – I felt chafed, sore, broken and overheated. 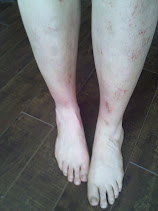 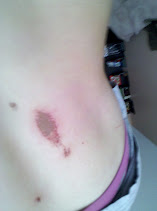 – the regular beat up legs (nothing new here)
– a lovely blood bruise on my back where the wet pack rubbed for almost 12 hours
– my right achilles started to bother me on the second lap, and I could feel it for a few days after, when wearing running shoes
– chafing was probably the worst… I ran for hours before, but I never ran for hours in wet clothing. I cursed myself for not carrying BodyGlide in my hydration pack, dreaming of vaseline, olive oil, butter, and all things slippery
– I felt under the weather for few days after. It was as if my body was desperately trying not to get sick after this mammoth physical effort. I said, “It’s ok, body – you can get sick now”. Knock on wood – I managed to beat it.

The drive back home was uneventful – although I felt my muscles stiffen up more and more at every single rest stop. It was getting progressively more difficult to get out of the car. I took Sunday after the UB off, taught 4 yoga classes on a Monday as active recovery, and was back at the gym on Tuesday. Oh, how the jump squats hurt. It is now almost two weeks later,and I seem to have escaped injury free.

At least a few have commented on losing their mojo. As I mentioned in a recent post, I have been dragging my feet a bit this week, making it to the gym to get it over with, rather than really push.

A number of posts has been published by the racers who did not complete the Ultra Beast. As I deal with Ultra Beast post-partum, the huge medal does cheer me up… I bet the post-race blues are taken to a whole different level for those showed up and pushed, and fought, and… did not finish.  Team Redemption is over 100 members strong, and they promise to bring vengeance to the mountain next September. I have no doubt they will slay the (Ultra) Beast.

My first DNF is still looming ahead… I wonder what it will be.