Sad Doggie, And Moping About Injuries

Last weekend I run into my dear friend Karin at the yoga studio where I teach. She is a fellow yoga teacher, and one of the most awesome people I know. Think start line Sean, but female. And Israeli. And a yoga teacher. 🙂

She shared that Butch, her gorgeous German Shepherd, was having some trouble walking. He’s only 8. As she took him to the hospital, the vet said Butch needed surgery. For the next few days, as they were waiting for the procedure to be scheduled, Butch got worse as his hind legs stopped working altogether.

Butch, usually happy and upbeat, drooped. His eyes drooped. His mouth drooped. Karin was so concerned, she measured his face. It was longer. [Kudos to Karin for knowing how long Butch’s face usually is!] As she called the vet clinic, the doctor said: “Oh, that’s what happens when they are really sad”.

Butch had a long face.

“I’ve never seen Butchie sad”, says Karin. “But he is so healthy!”, she adds.

Later that day I realize how well I can relate to Butch. You see, I’m injured. Again.
I came out to a running club meet few weeks back, and got my ass handed to me. Again.
However, this time, I pull a hamstring. [Again.] A nagging feeling at the insertion point would not go away.

And this is exactly how I react to injuries. A long face. I get sad. 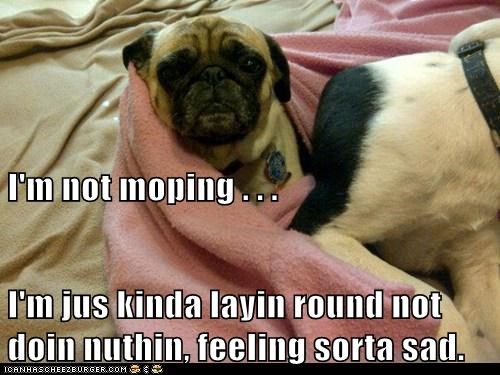 It’s so frustrating. Because I also am so healthy! I want to be bouncing off the walls! I’m like a strong German Shepherd who looks at his legs and wonders what happened.

“Don’t be an idiot!”, Rolland reminds me after the fact, as I come crawling for some tough love aka massage therapy. “You cannot keep up with them, because you are not one of them!”. Rolland is talking about mono-athletes, those who only have one sport. And this is the conversation we’ve been having for a number of weeks now.

He’s right – I can’t outrun the runners, and can’t outlift the lifters. I don’t quite belong anywhere. [Not moping… not moping at all.] Hello, impostor syndrome, old friend. 🙂

Rolland is my GMT (God of Massage Therapists). He is a 6’4 former rugby player, who today treats athletes ranging in caliber from professional athletes to the likes of my mud-crawling butt. He is part of my informal support crew, and inner tribe.

Remember that adorable no-BS manicurist that Reese Witherspoon had in Legally Blonde? Exactly. Only instead of doing my nails, he drives an elbow into my back, so I see stars. Whatever works to help you see God, right?

As I complain about a knot in my calf one day, a running partner says “Have you thought of rolling it out?”. Hmmm… That’s a possibility. Or I can Rolland it out! 🙂

When I first found Rolland four years ago, I referred to him as The One for months. Today I’ve shifted that label to Italian (as he also cooks).

I came for a who-knows-which-one injury. “What are we trying to do here?” he asks.
“I am not here to relax” I say. “Fix me.” And fix me he does. Again and again.

Yesterday marked three weeks since the injury, and my chiropractor cleared me for running, and body weight training. No sprinting, no downhill running, no heavy lifting. Thankfully, he is not too concerned, as the sprain seems mild.

Annie Thorisdottir posted the following quote by John Wooden on her Facebook page after announcing she was out for the remainder of the CrossFit Games due to a back injury: “Things turn out best for the people who make the best of the way things turn out”. Amen, sister.

My to do list for the next few weeks:
1. heal
2. shorten face