The weather on Friday turned out to be bad enough for a number of participants to drop from the event at the last minute, because the drive was simply not realistic. Many flights were delayed, or even cancelled.

After crushing CrossFit Open 13.1 workout, Mike and I were en route to the airport to pick up the next badass on our team, Leyla Di Cori. Her flight was delayed as well, but that gave Mike and I an opportunity to load up on some food, and drive around the Queens, looking for the damn airport, periodically swearing at the GPS chick.

Mike and I definitely stood out at the airport, among the shy Asian business men, and quiet cab drivers with white board signs. The wait included running up and down the stairs, and even a dare to see how long it would take security to come up to us, if we were waiting for Leyla in a handstand with our feet against the wall.

As the other Canadian appeared, there was no doubt, she belonged to our party. I think people deliberately moved out of the way, as we were hunting down Leyla’s tiger print luggage, and then finally heading towards the hotel. 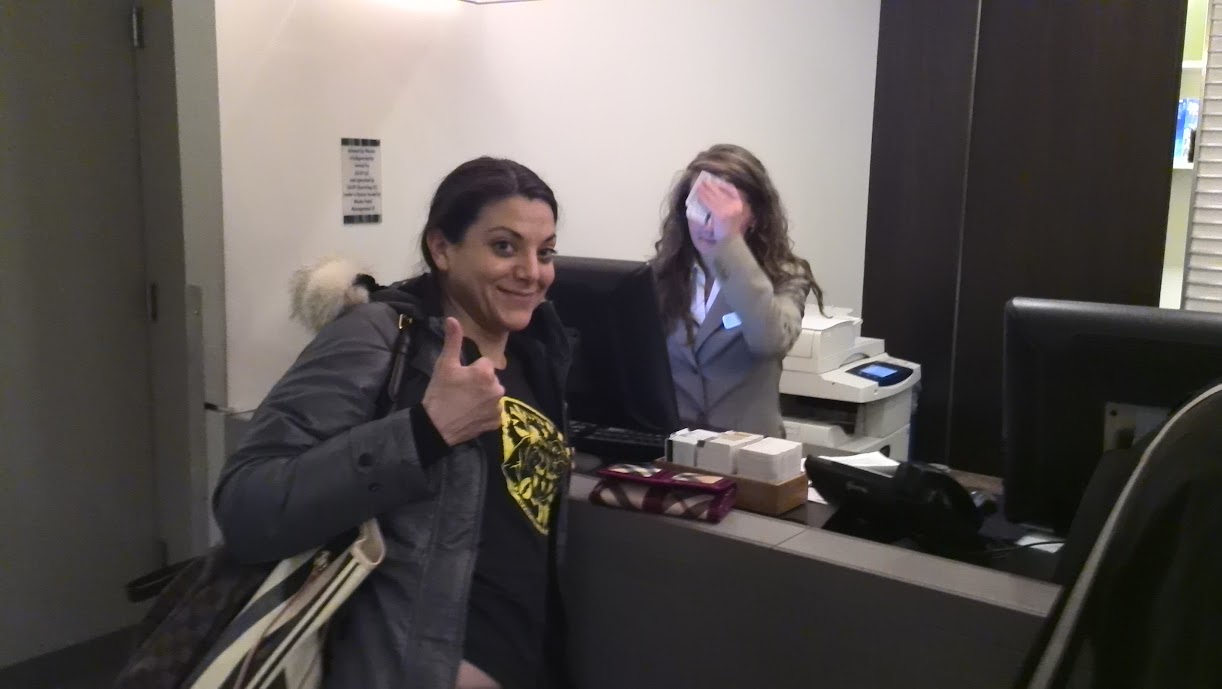 Then it was time to gear up. From all the random items strewn on the bed, multi-purpose tools, rope, sand bags, duct tape, head lamps, and garbage bags, it looked like we were about to rob a bank. 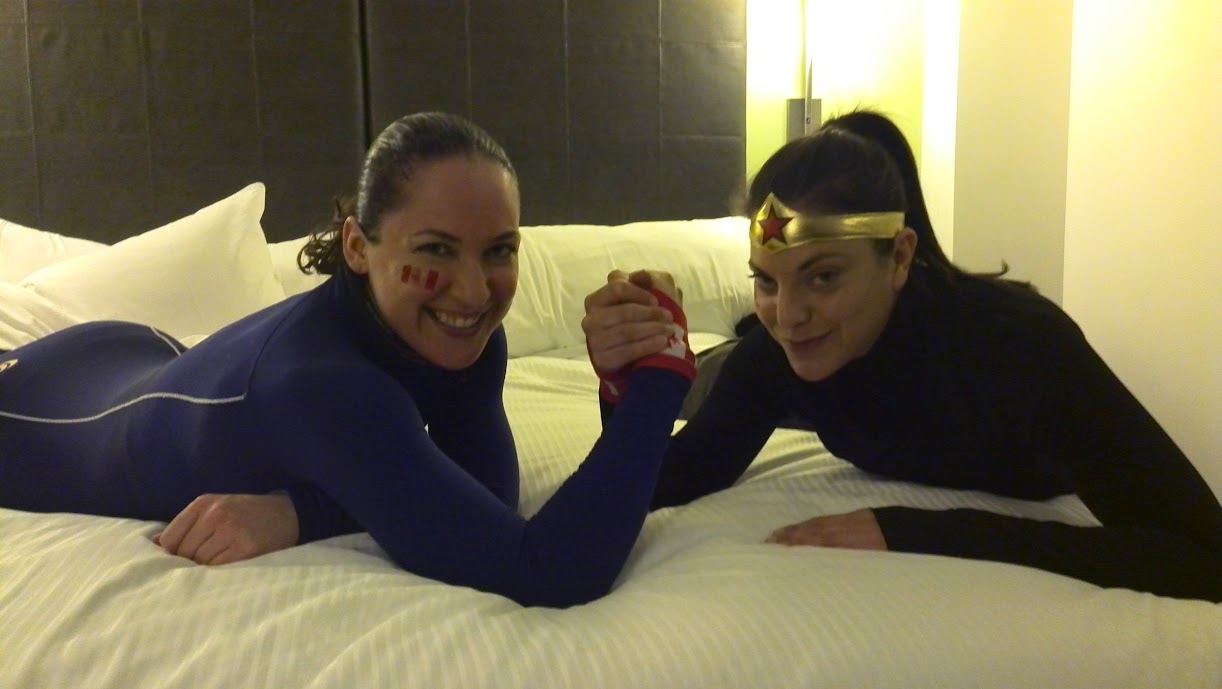 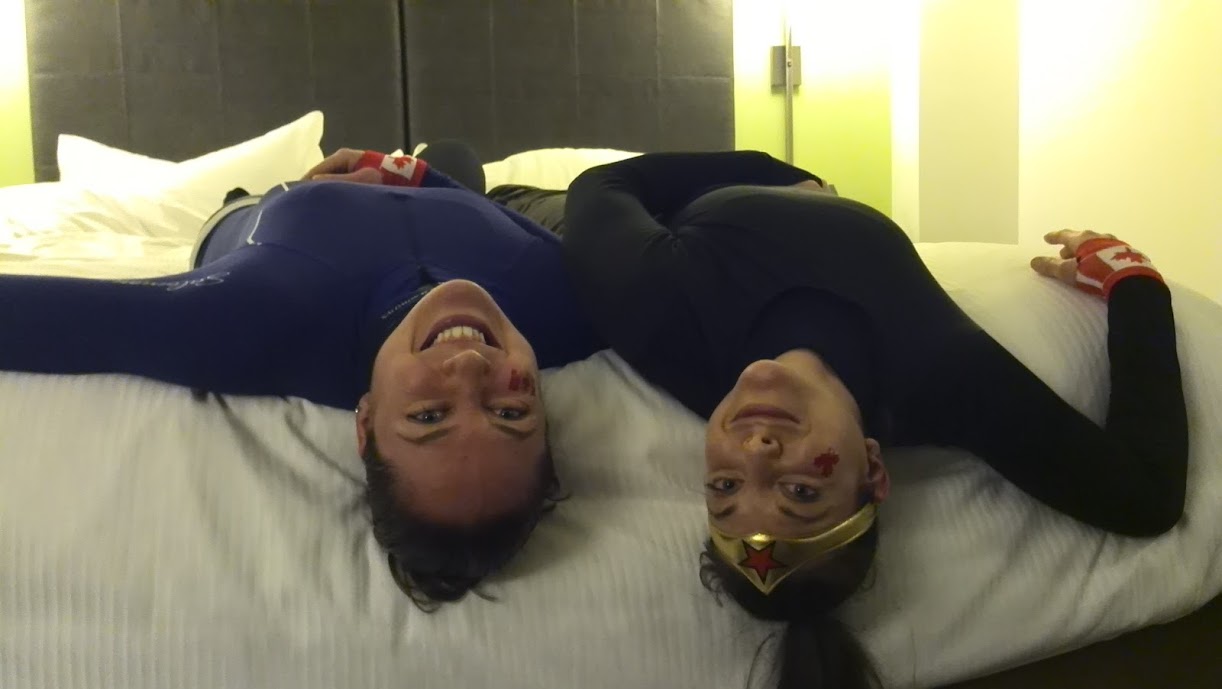 We finally headed out from our hotel towards the meet-up point. David, our team leader, had my backpack prepared, so I threw all of my gear into a cloth shopping bag, and off we went. I gotta say, I looked hilarious with that bag.

Team Bravo, aka Sparta, consisted of 10 members, and an additional member that was adopted from another team. We met in the lobby of Conrad hotel. As the cab dropped the three of us off, we had to do a double take. It was a fancy hotel. In fact, we were a little worried about getting in – after all, in running tights, Gortex jackets, and tukes, the look did not exactly meet the black tie standards. Most of our team members were already there waiting, and so the first round of introductions took place.

We were missing three members from our team, including the leader, as they signed up for an optional early start, and were running around the city since 7.30pm (read: they were that much crazier than us, and I have no idea how they did it).

Finally, just before 2am, it was time to head down to the starting point. Rockefeller Park, just off the water. By this point, I was way too warm from sitting in the lobby, and sleepy. The wind is freezing. I cannot even fathom going near that water. Normally, I’d be in bed hours ago. This was only the beginning of a very very long night.

We walk around the park, up and down the path. Other members are nowhere to be found. The local park ranger informs us that the park is closed, and we are not supposed to be here. She does not look impressed. I’m sure we look suspicious.

We finally find the rest of the group around the corner. As we line up, there are about 50 people with backpacks. And yours truly, with a cloth shopping bag. We are still missing our team members, but S.E.R.E. has started.

The first 45 minutes is spent in some basic PT (physical training). We run around the block, we do some squats, we form lines. I’m sure I look clinically insane (even more so than others), doing all that with a shopping bag, bouncing against my shoulder.

Finally, David and others join us, and we line up for the gear check. I have a backpack – yay! We hold up the sand pills, the rope, the sharpie, white t-shirt – all from required list of gear. All food is to be packed into ziplock bags with your name on it, and handed to the instructors. Dear Cliff bars, how will I miss thee.

White t-shirts are laid out on the asphalt and spray painted. The t-shirts spell out S.E.R.E., and are to remain visible on our persons at all times.

The first mission involves finding a yellow envelope in the vicinity – we run around the block, turning over garbage baskets, and looking into flower pots. Finally, there is an envelope under an orange cone. Next mission – relocate to the start of the Brooklyn Bridge. As Todd Sedlak, one of the instructors, will mention multiple times throughout the night, our team is “stacked”. Awesome bunch of endurance athletes and obstacle racers, we make it to the bridge first! Team Sparta – 1.

We get back the ziplock bags with food. To be honest, I haven’t even had a chance to get hungry yet. However, I am still cold and miserable. I set out a personal mission to just make it to sunrise. The sun makes all the difference.

At 1,825m or 1.134mi, this bridge was the longest suspension bridge in the world until 1903. When you are not crawling the bridge in the middle of the night, but rather checking out the pretty pictures of said bridge, it looks this way: In Indian sprints, a group of people runs in a straight line. The last person in the line runs to the top of the line. This is repeated until the run is finished.

In S.E.R.E. Indian sprints, a group of people is splayed out on the wet salty pavement with heavy rucks on their back. They drag themselves across the asphalt in something resembling a line, all while screaming at each other about pace and technique, until instructed to get the hell up, and start over.

Take two – no talking. One line. Low crawl forward. The last team runs to the top of the line, drops to the floor, and continues to crawl. Rinse, repeat.

This. Was. A. Bitch. In all honesty, this would have been a bitch of a task to do with two good wrists. I realize early on how much more pressure I have to put on my wrist in order to drag my body in any direction, when I have a heavy backpack on me. Eventually, I figure out a side body drag by resting on one forearm, and then pulling the torso forward, until I awkwardly land on the front of the shoulder. Again. Again. I look about as graceful as a beluga whale. You know… if a beluga whale had to drag itself across a Brooklyn Bridge. After being shot.

Couple of times, I stop to ponder the meaning of life, with my cheek on the asphalt. Did I mention that this bridge used to be the longest suspension bridge in the world?

On an average day, over 100,000 people cross this bridge. However, it seems that these people are mostly crossing the bridge during office hours. We did not encounter too many of these individuals between 4am and 5.30am, apart from two groups of cyclists (now there is a crazy bunch!).

When we are about half way there, the surface changes from concrete to wood. Sliding becomes marginally easier, and my spirits lift. In fact, at some point, I find myself questioning Todd Sedlak about his views on differences between Greek and Roman mythology. Yes. Seriously.

Half way through the bridge, the sun is rising. We pretend to be deliriously happy in this picture: At some point, we even get the luxury of lunging forward (upright!).

The. Most. Epic. Picture. Joseph is doing an impression of Frankenstein. Kevin is ready for action in a sumo stance. All three look like we just spotted Godzilla. I mean, can you actually imagine crossing the bridge and witnessing this? I swear I would turn around and run in opposite direction…

I pass the time by reading out the graffiti on the side of the bridge. Out loud, obviously. And with commentary. The messages mostly represent an eclectic blend of political campaigns, love notes and racial slurs.

A favorite: “We can’t hold hands, someone may see. Why don’t you hold your toes with me?”. Don’t judge.

At this point, my personal mission is accomplished. The sun is rising. I am not even a little bit warmer.

In retrospect, I underdressed, showing up as I would to a road race – ready to run. Gortex pants over my running tights and another layer would be incredibly helpful. Crawling across the bridge, while all kinds of miserable, does not really raise your heart rate. And pressing my belly button against ice and salt for the past two hours did nothing to preserve my core temperature.

The endless bridge of hell ends, and we make our way to the Brooklyn War Memorial. First opportunity to take off our backpacks. And pee.