I headed out towards Syracuse on Thursday. The plan was to make it to Mike’s house, stay for the night, and then head out towards New York City on Friday morning. Mike has previously starred on this blog, as we did the Goruck Challenge (and Spartan Super, and Spartan Sprint, and Spartan Beast, and Lindsay Chase, and Toronto Triathlon Festival, and 5 Peaks Enduro Trail race) together.

David, our S.E.R.E. team leader, had a ruck and most of the gear waiting for me in the city. Given that the trip was so last minute, I had the luxury of just showing up with clothing, and food.

The drive was relaxing – I love long drives with no hard deadline. I started getting sleepy about 2.5 hours in, and pulled into a rest area for a 20 minute nap. Every time I got out of the car, it seemed to get colder. Oh man, I so did not look forward to spending over 12 hours in this, I thought to myself, filling up my car with gas, shivering from the wind.

I finally made it to Syracuse around 10pm, and after a feast of Chinese take-out, beer and catching up, it was time to hit the pillow.

As I looked out of the window on Friday morning, the ground was covered in snow. “Hmmm… this is going to be colder than I thought”, was my first reaction.

Starbucks coffee in hand, the road trip has begun. We had the accompaniment of body guards. Just in case.

Mister and Missy. The guard dogs. 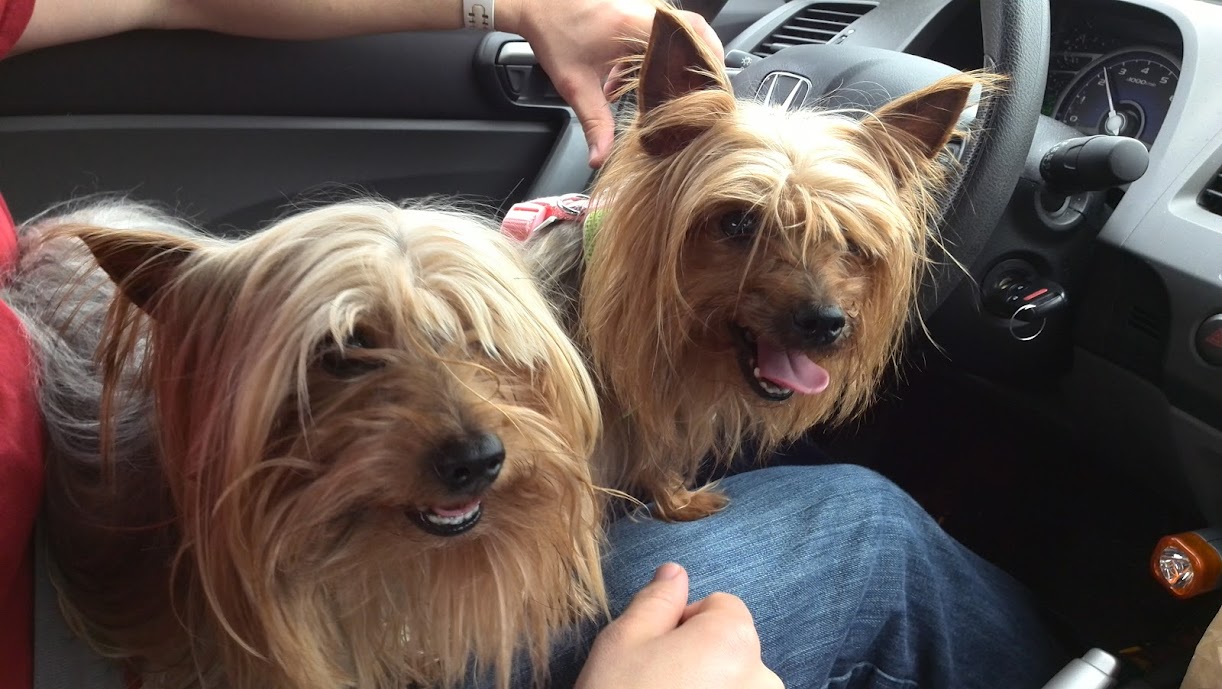 The drive to New York was long! It felt like we crossed some sort of seasonal border, as the closer we got to the city, the whiter it became. I called home to wish my mom Happy International Women’s Day (March 8th, everyone!).

“Are you enjoying the weather?”, she asks. “It’s so nice and sunny”.

“Umm… no, not exactly. I’m almost in New York, and it’s a freaking Winter Wonderland in here”.

When we finally made it to the city, I’ve had another item on my agenda. After chewing fat for weeks, I decided to register for the CrossFit Games Open. The CrossFit Games Open has started this week, with the first workout posted on Wednesday night. Athletes competing in the Open, have to complete five workouts over the course of five weeks, and post their results online in order to be compared and placed against other athletes.

Of course, as soon as the workout will include kipping pull-ups or double-unders, I’m kinda screwed. But, whatever… I figured it would give me a good base line, if I wanted to try again next year.

My box had their Open workout on Friday, and thus, I was not going to be able to do it with them. The results were due by Sunday night, so I wouldn’t be able to get it in after S.E.R.E. either. Solution – try to find a CrossFit box in NYC and do it there – a little warm-up before an all night event. Why not?

CrossFit NYC The Black Box is the largest CrossFit gym in the world. Their website proudly asserts: “we don’t sell shoes or shakes, teach yoga or boot camps; we do one thing: CrossFit training”. They hold over 300 workouts every week, and the open workout was happening every hour ALL DAY on Friday AND Saturday. Jackpot!

One of the awesome moments of the weekend: as we enter the lobby with sports bags slung over our shoulders, and protein shake bottles in hand, and start looking for signs of where to go next, the concierge takes one look at us, and says “Second floor!”. As in… “these guys are clearly not looking for the dentist”. BAM!

This gym is a large open space, divided into quads, with multiple workouts happening at the same time. 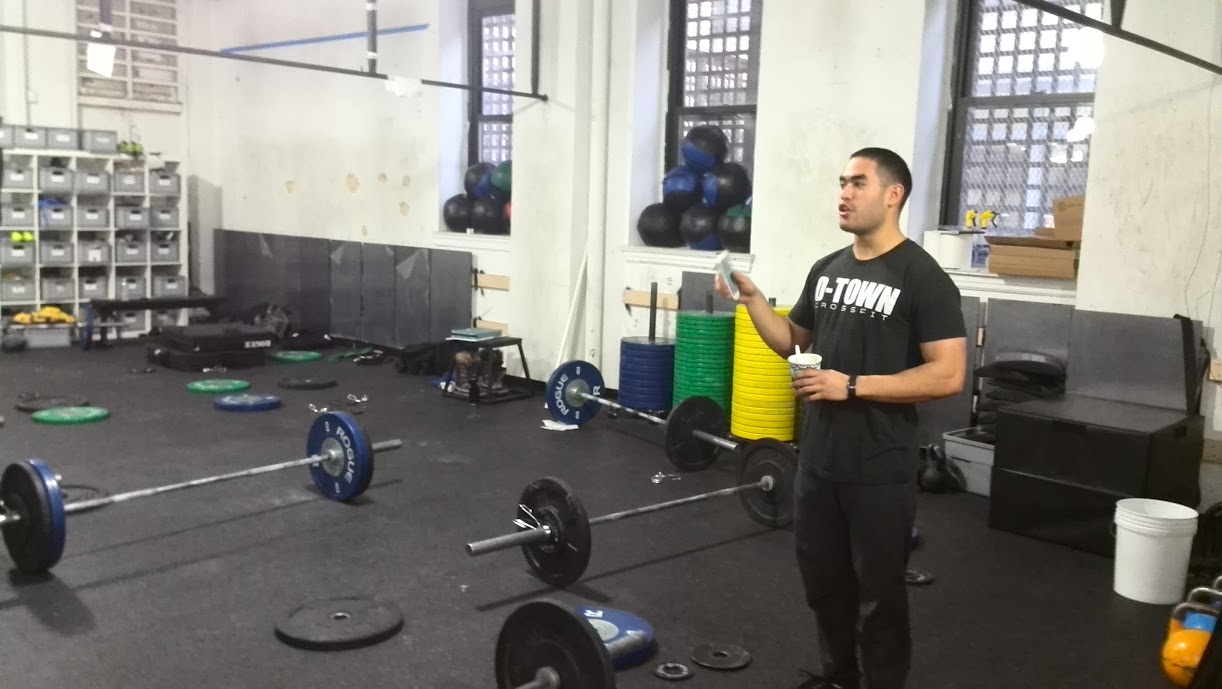 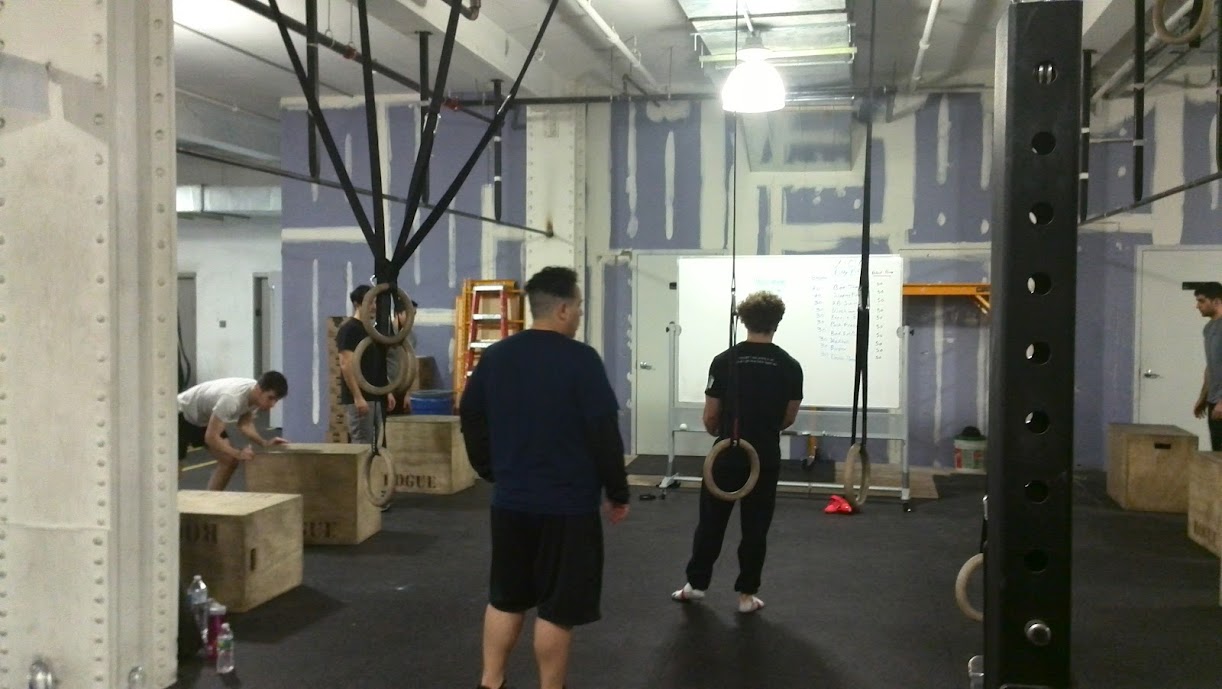 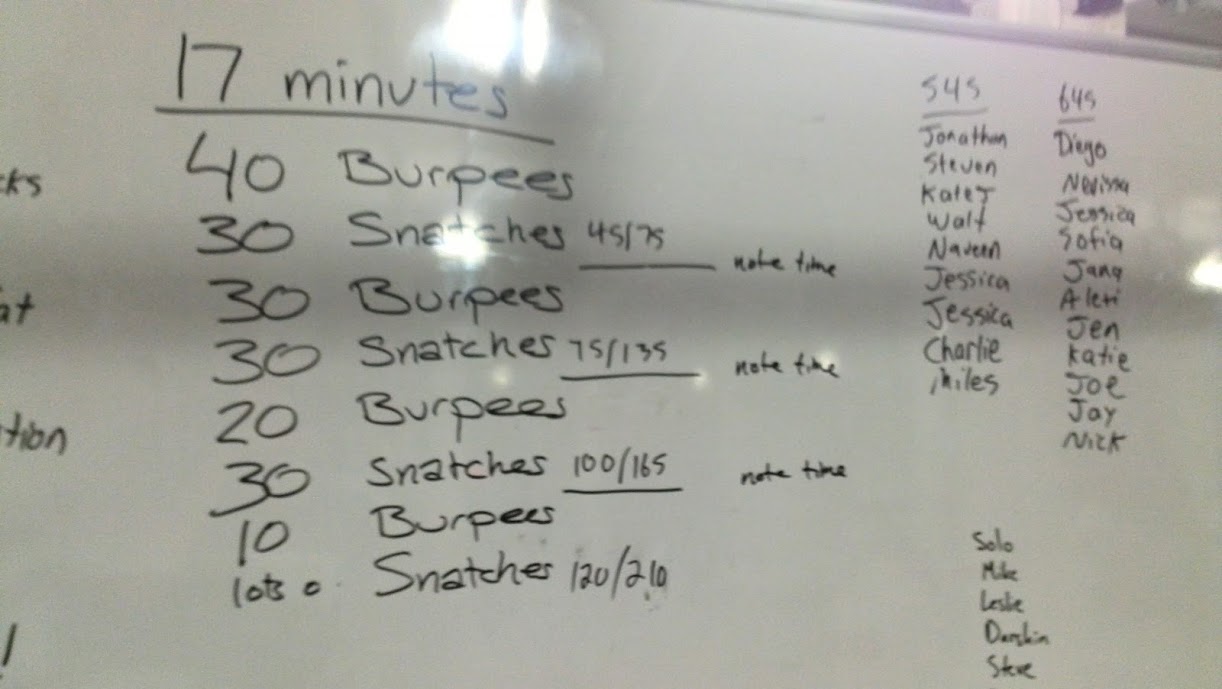 I have done snatches exactly once before. I was able to snatch 85 pounds twice. Thus, I obviously wasn’t getting through 30 reps of 100 pound snatches. This was also Mike’s introduction to CrossFit. Go hard, or go home, right? 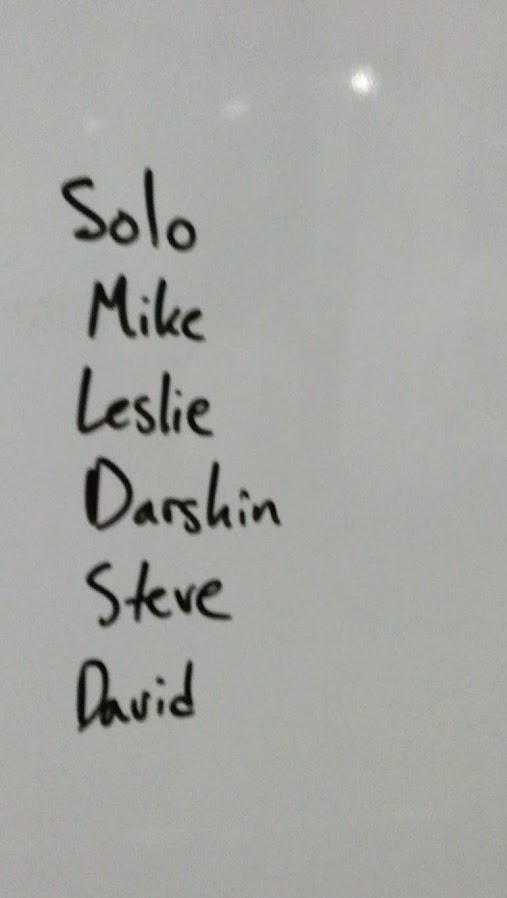 Open workouts have to be validated by a CrossFit judge. Here’s Kevin, counting Mike’s burpees. 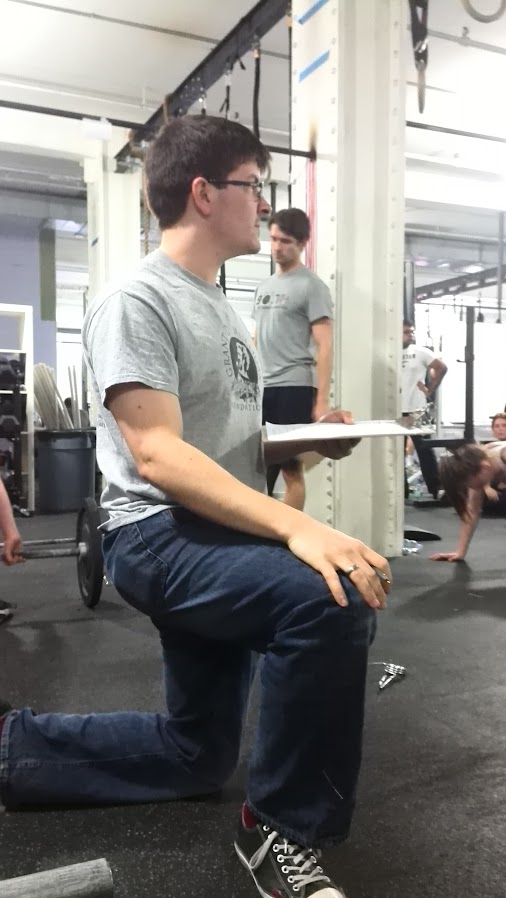 Mike went first… He hasn’t done snatches since high school. And he rocked them. As Kevin, our judge, put it: “Give him some form, and he will be an ANIMAL!” That’s right. 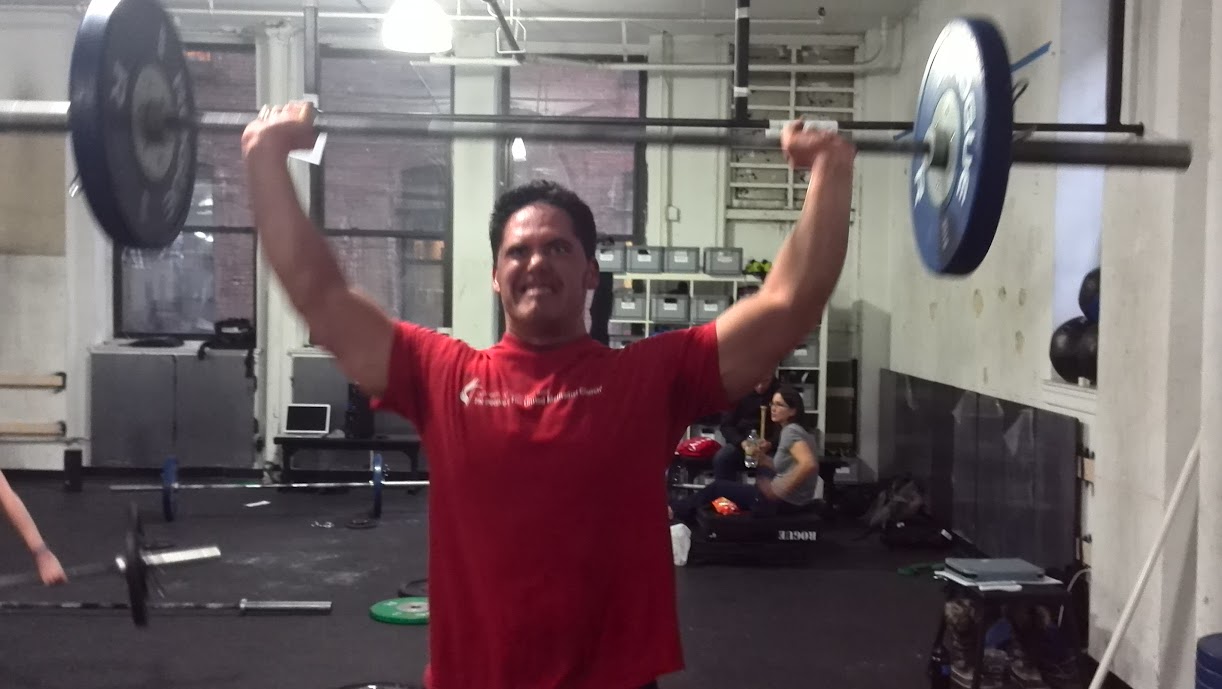 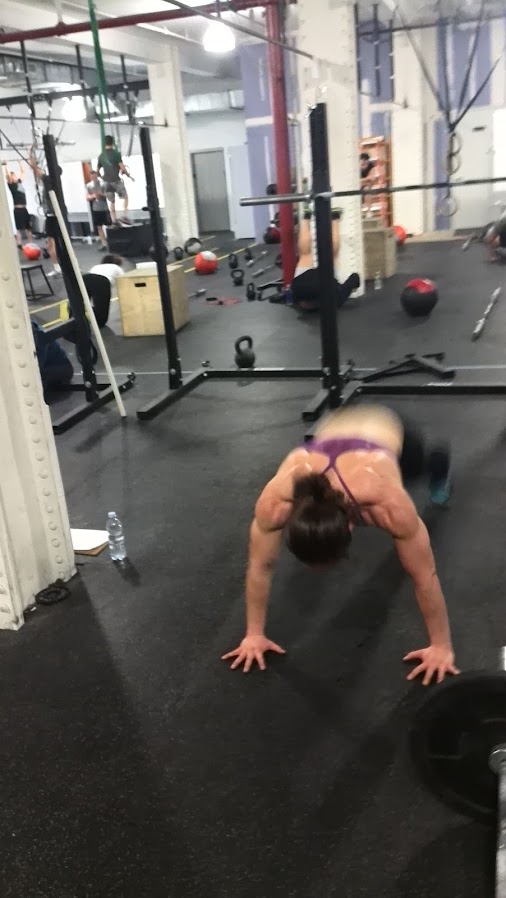 My final score was 150 reps. I changed the weight plates on my bar with 10 seconds to spare, to try to get in one rep of 100lb snatch. That didn’t happen. In fact, I have attempted the snatch two more times after the clock ran out. Nope. Not yet.

Awesome experience at an awesome gym. Our day was looking incredibly productive already! Next, we were off to the airport to pick up another team member, Leyla Di Cori.