“Much of your pain is self-chosen.”
– Kahlil Gibran

The God of running is flying, his many faces glistening in the sun. His many feet are kicking up imaginary clouds of dust. His bony ebony elbows propel him forward. The faithful cheer wildly at this presence, but the God does not notice. He cannot hear them.

It’s the Kenyans. Every single one with his face scrunched up, and the eyes slightly bulging, is running at the very edge of his ability. Nothing else exists for the herd. Moving as one, they might as well be running in another dimension. It’s a divine sight. Darwin would tear up, indeed.

In one interview, a journalist asks one of the elite runners, “What do you think about when you are running?”. The poor chap didn’t understand the question. “When I’m running, I think about… running?!”. Now, if that’s not Zen Buddhism, I don’t know what is.

As I hug Jen, a fellow runner and obstacle racer, at the expo the day before, she cheerfully says: “Well, I’ll see you at the start line!”. “Right!”, I scoff. 27,000 freaking people. All in one place. Yet, lo and behold, there she is. I run into three more friends. All separately. Ah, the running community. To rephrase the tag line of Stuart MacLean’s Vinyl Cafe, “We may be big, but we’re small!”.

I wear my beloved long-sleeve racing shirt, and Salomon running tights, which I christened my Sexy Beast pants. (What little) common sense (I have left) prevents me from posting close-up photos of my butt, wearing said pants, but… you’ll have to trust me. If Cat Woman ran marathons, she would wear these pants.

Later in the race, Caveman, who is part of the support crew, says he was on the lookout for the overdressed Siberian chick. I try to protest at first, but then reconsider and nod. Most runners are wearing tank tops and shorts. I start out in a shell jacket, which I take off fairly quickly, but still remain more covered up than most. My argument is that the faster you are, the warmer you feel, thus, the less clothing you wear. Well, I ain’t running no 5k, people, and yes, I will be out there for a while.

I walk towards the start line, the elite runners are warming up in the first corral. Man, these guys are skinny. I wish I could give some of them a sandwich. And a sandbag. Later in the day, I crank my neck, looking over my shoulder, and get a quizzical look from Italian. “I don’t have a runner’s butt, do I?”, I ask hopefully. He reassures me that I do not.

My dear roadies, I love you and your absence of butt. A pronounced Gluteus Maximus does nothing for your speed on a 42km flat course. But I have a feeling I may need it in Vermont next year. 🙂 Those hills are not going to conquer themselves.

The gun goes off, and I am suddenly a mess. The Meaning of Life by Offspring, playing in my ear, does not make things any easier.

“I know your path has been tried and so
It may seem like the way to go
Me, I’d rather be found
Trying something new”

Tears interfere with my pace. I speed up even more, trying not to get wet, now almost flying through the colorful blur.

My life flashes before my eyes in neat one-kilometer markers.

“Your house is your larger body”, reminds Kahlil Gibran. These are not kilometer markers, they are my limbs, my cells, my organs.

Toronto is the closest thing I’ve ever had to a home. And now running along major routes, recognizing one store after another, one coffee shop after another, it is indeed as if I’m running in my own neighborhood. With thousands of my closest friends. 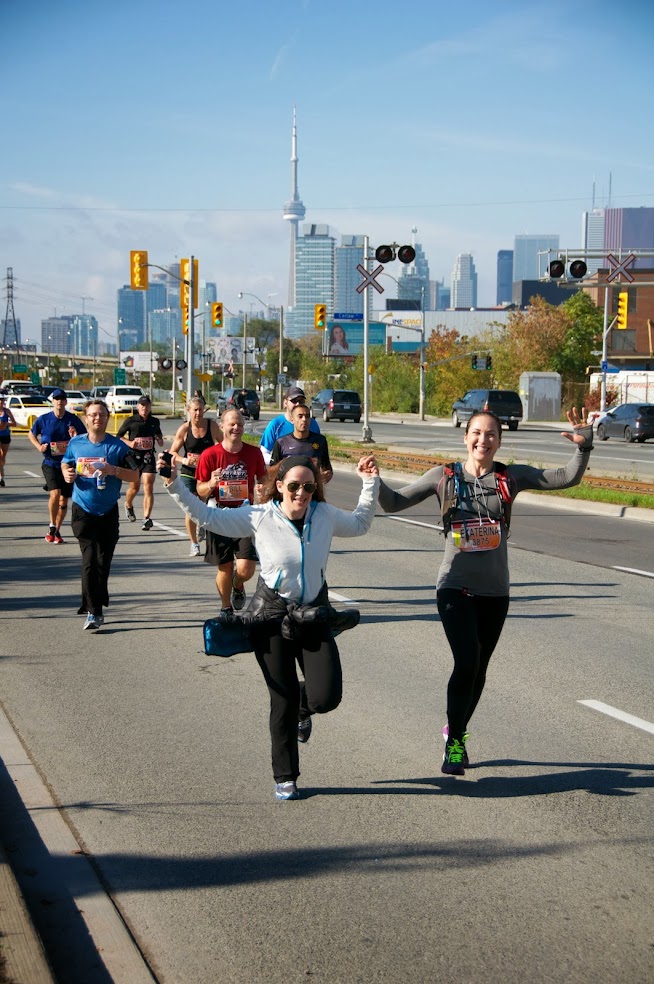 No destination race can compare to running home. Because it’s… home. It’s safe, it’s yours. It’s familiar. You can run by the coffee shop where you buy your favorite morning glory muffins, and the owners know you by name. And you feel all warm and tingly, and the emotional happy tears are just so close to the surface. And your friends are cheering you on, it’s as if this whole city, your city, cheers you on, wants you to finish, wants you to enjoy every minute of this perfect October day. 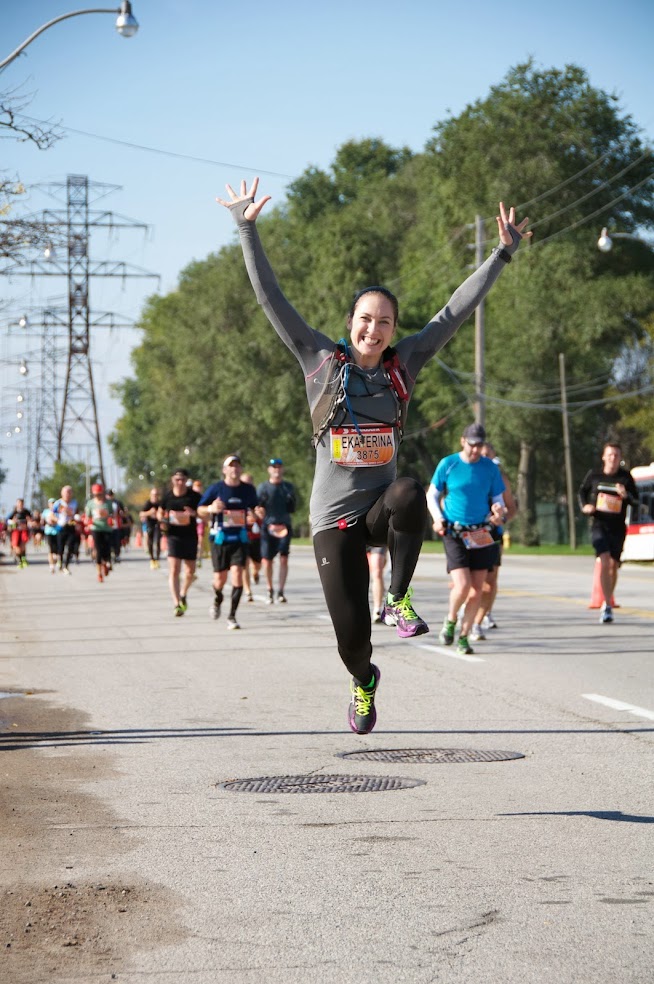 Kilometers go by. Fly by. Drag by. The course is as flat as a pancake, and although I do not bonk, once we pass the 30km marker, I am also oh-so-ready to start heading in the direction of the finish. After yet another turnaround, when we start heading away from the finish yet again, a feeling of hopelessness shrouds me.

In a stupor, I realize that this race will never finish. I will just have to keep running. Forever. This is like another dimension of life from a Stephen King novel.

“As the sun rises, they run. Their weary faces do not display any emotion, just a steely determination to keep running. They will run until sunset, and as the fiery ball emerges on the horizon yet again in the morning, those who remain will keep running.” [My sincere apologies to King for the brief impersonation.]

Another turnaround. “Ok, this is it!”, I think. “Just make me turn around one more time, I dare you!”. I’m not sure who I am talking to exactly, but I am sure pissed. “I have $20 in my hydration pack, and I swear, I will go off course, and head to the closest bar for a beer. After which, I may or may not finish. May all be damned.”

A familiar face jumps out at me. Goss!

Goss is cheering wildly, as I break into a huge grin, and give her a misplaced high five. What a nice surprise. Wait, focus. Goal – not to die before the finish line.

Wouldn’t it be hilarious if I sprinted for 800 meters, and then totally faded in the last 200m?
No, it would not. In fact, it would suck ass.

Goal – not to die before the finish line. I sprint. Some minutes, seconds, hours later, Johanna puts a medal around my neck.

And so it ends – my most meaningful race this year. My longest road run. My first marathon.

“Much of your pain is self-chosen.
It is the bitter potion by which the physician within you heals your sick self.
Therefore trust the physician, and drink his remedy in silence and tranquility:
For his hand, though heavy and hard, is guided by the tender hand of the Unseen,
And the cup he brings, though it burn your lips, has been fashioned of the clay which the Potter has moistened with His own sacred tears.”