I’m Going On A Diet!

*This essay was written in January 2013.

The New Year is upon us, and I can’t possibly be left behind without a new year’s resolution. Can I?

How about going Paleo for a month? Dedicating myself to CrossFit? Or maybe I should do a cleanse. (Nah, just joking.) I thought about it. I considered it. I talked to friends. So here it goes.

I am going on a diet.

No, wait. Before you roll your eyes, and tell me that it’s easy and that you’ve been on this diet for a while, and that this diet responsible for the spare tire around your waist (or thighs, or whatever), hear me out.

In psychological research, tolerance for ambiguity, the ability to perceive information in a neutral and open way, is positively correlated with intelligence, creativity, and resilience.

Black-and-white thinking is, on the other hand, is associated with conservative and authoritarian personality. Fat is bad! All carbs are bad! True story.

Every year has a theme, a focus, a word. You can’t really force the theme. It emerges, appears, comes naturally, like a pet name.

The word for 2011 was “explore”. I took that one to heart. I traveled India for six months. I joined a mountaineering expedition to Himalayas, summiting three peaks while being in the mountains for the first time in my life. I rode a motorcycle. I bungee jumped and skydived. [Insert a looong list of activities here]. 2011 was a transformational year. I wandered. I experienced. I discovered.

The word for 2012 was “create”. I created new, functional relationships. I created my first home. I created this blog. To create the space, I consumed less. Less junk, less processed foods, less wheat. Less information, less media, less music. I spent more time by myself. I discovered my inner introvert (I have one, I swear). I wrote more. I got stronger and healthier. I became an athlete. 2012 was a transformational year. Yet there was a lot of structure in 2012. A lot of rigidity. My diet, my training, my schedule.

The word for 2013 is “trust”. Trust my intuition, trust my choices, trust my body. So I’m not doing Paleo. Maybe one day.

After all, there is something to be said for not needing a New Year’s resolution. I do not want to eat any differently on January 1st than on December 31st. Most of the time I want my bright vegetables, and my lean protein. They do an amazing job of keeping the engine humming.

Occasionally, I want Elvis for breakfast. I know you will ask. Elvis is a sandwich with peanut butter, banana, bacon and honey. Yes, you heard me.

Something like this… [ but you GOTTA use real bread, people!] 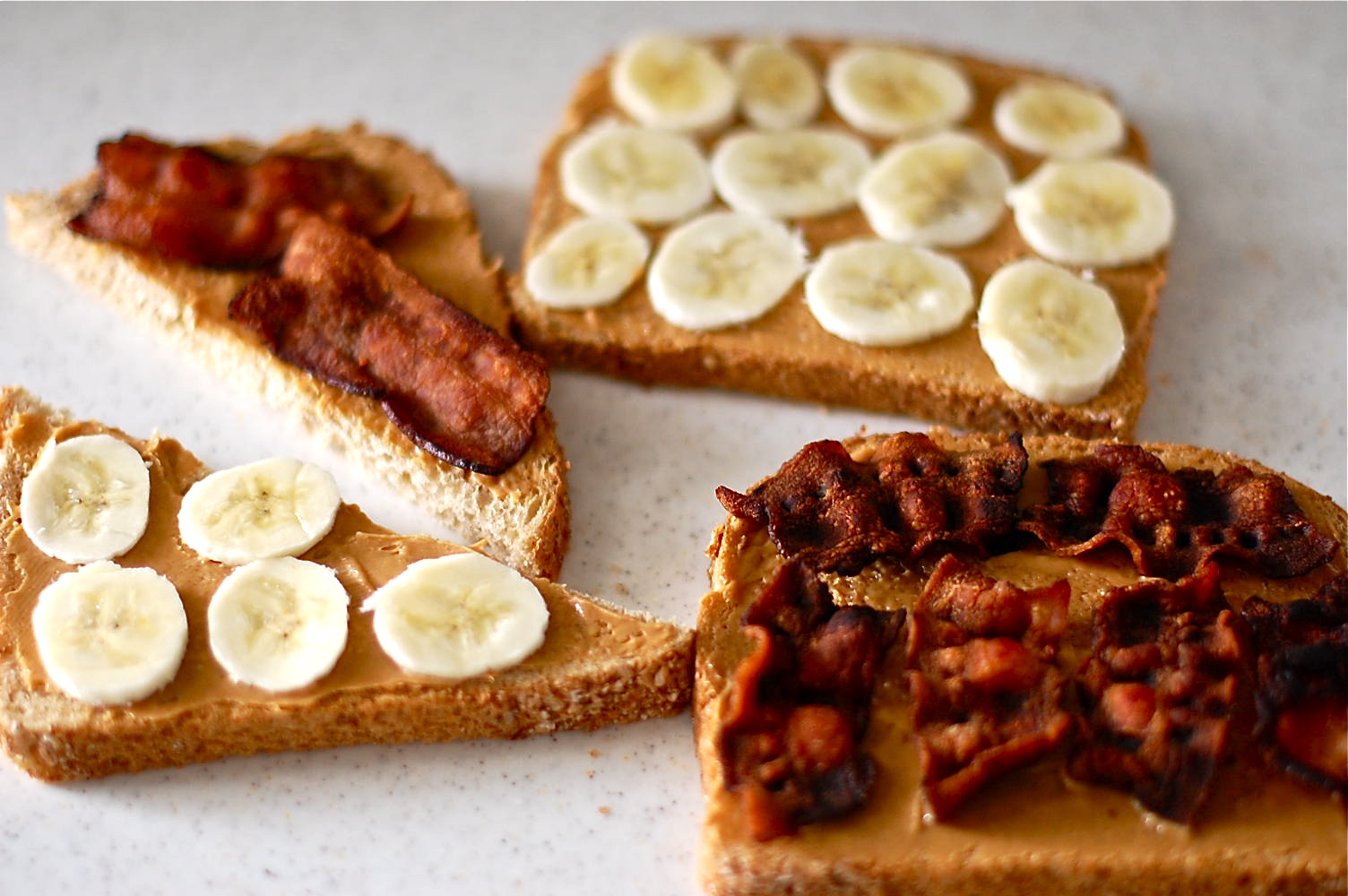 [Sidenote: The king of pop ended up with high blood pressure and a slew of other health problems. so the word “occasionally” is key here.]

Occasionally, I want a pint of beer. Craft brew. Cold.

Bottled Corona? Not worth it.

And if Italian makes homemade pizza with anchovies, I’ll be damned if I don’t have a slice. Or two. Then he usually hides the rest. In the freezer. Bless him.

Some refer to this as intuitive eating. I’d like to call it normal eating… Unfortunately, eating real food when we are hungry is not really that typical. We tend to swing between overindulging and restricting, to the point where many of us do not even know what hungry feels like any more.

If I sound casual or cavalier about this, let me assure you that I’m completely freaked out. I am going to spend an entire year, letting go of the rigid structure that I’ve spent so much time carefully building. Without structure, what’s left? What if it’s chaos? What if trusting myself will be a disaster?

Am I going to gain 100 pounds?
Probably not.

Do I think I am going to gain 100 pounds?
Absolutely.

Of course, the truth is somewhere in between. I will not be as lean as I could have been. But that’s the price of admission. The price of not being the nutrition Nazi to yourself and others.

Trusting myself to want to move my body, and to want to eat healthy food is much harder than dragging my sorry butt onto a hamster wheel of the elliptical, and chewing on egg whites with spinach because I “have to”.

Paleo would be a piece of cake (ha!) compared to this. This feeling of being freaked out is how I know this is the right thing to do. If you want progress, you gotta follow this feeling. Scared shitless. For the win.

There is no progress in comfort. The progress is in following the fear to the end. 2013 will be a transformational year.

Signing off,
Your Trustworthy Solo