This would be my second Goruck (you can read my event recap from Goruck Challenge Toronto 2012 here), and yet again I was packing hours before the start.

I spent a quiet Friday evening with my bricks (do I (again) sound like a psychopath or what?). 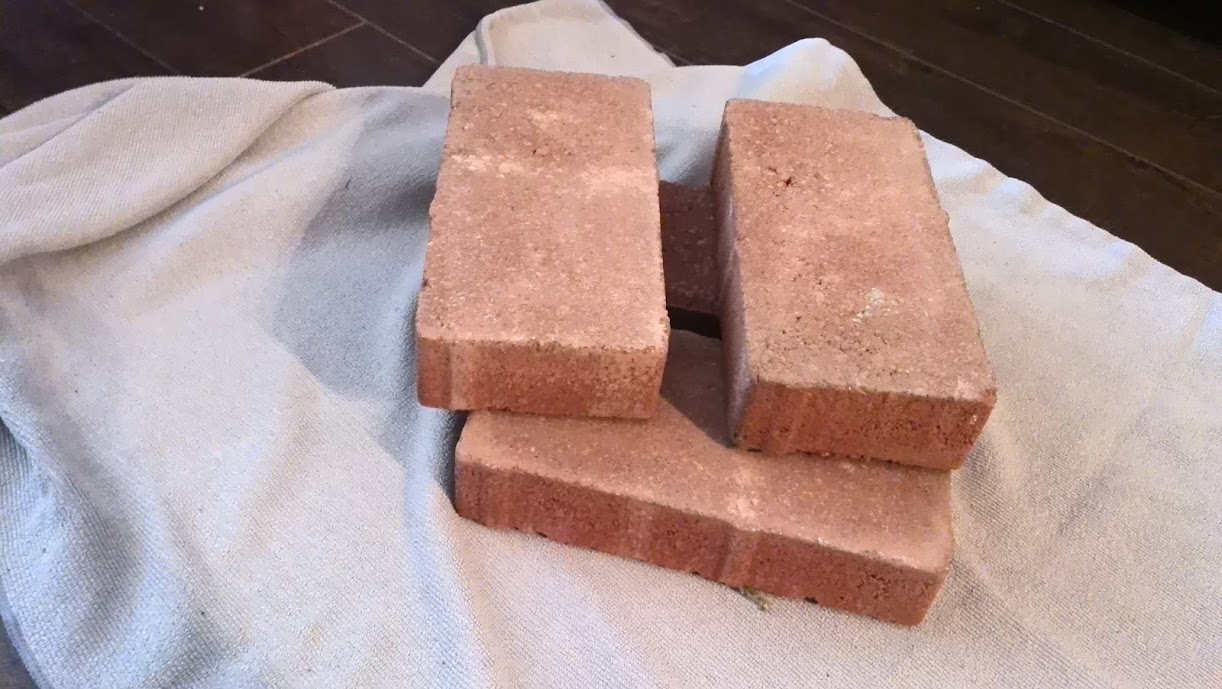 There is actually a method for wrapping bricks, believe it or not. After ending up with a bloody blister on my back after the Spartan Ultra Beast (and that was just the hydration pack), I didn’t want take any chances. 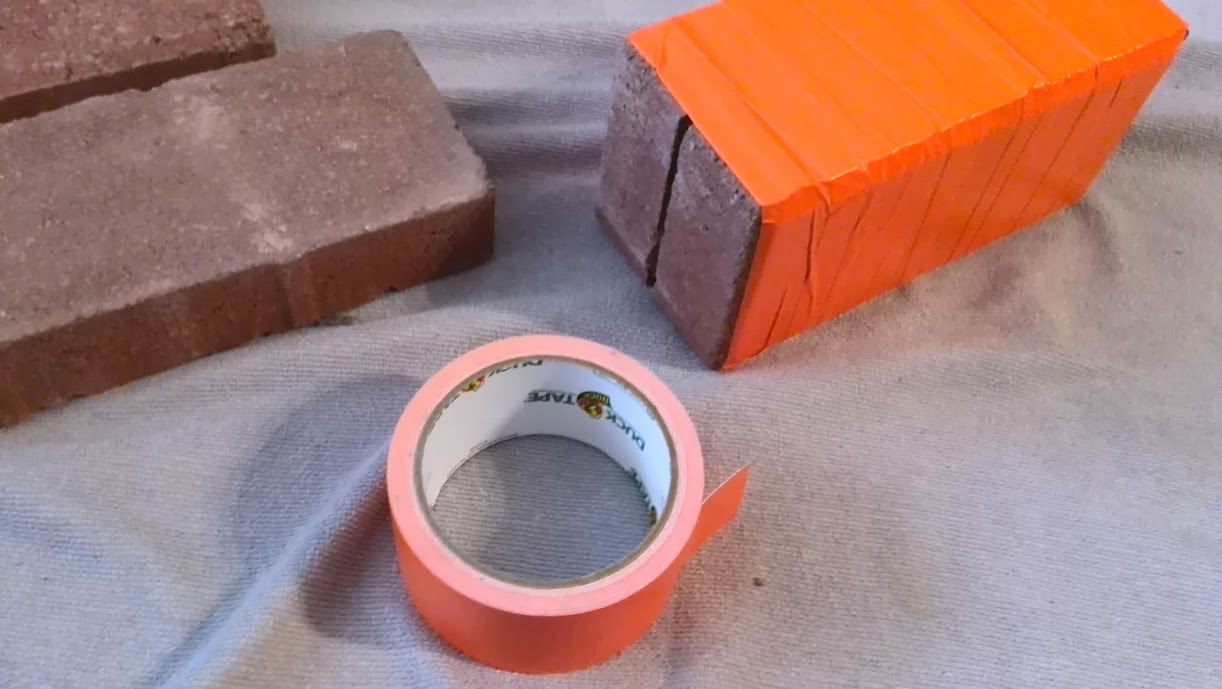 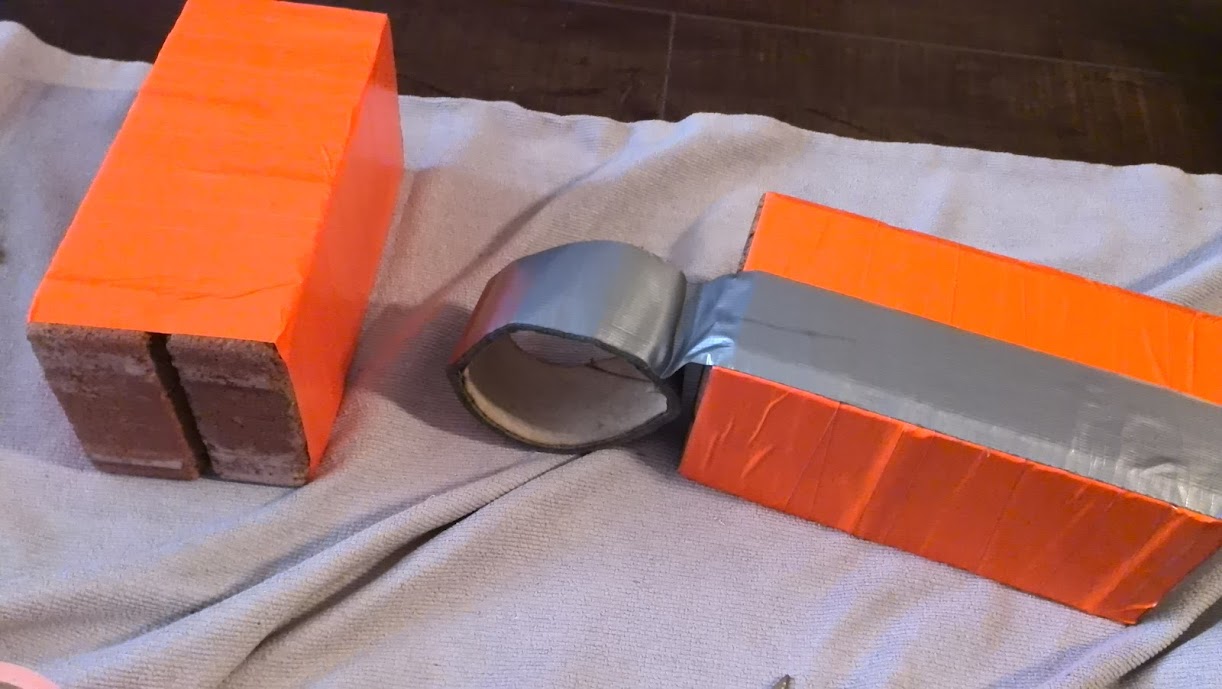 Rules – no skimping on duct tape, use different colors to keep the layers visible, at least three layers, re-enforce the edges. 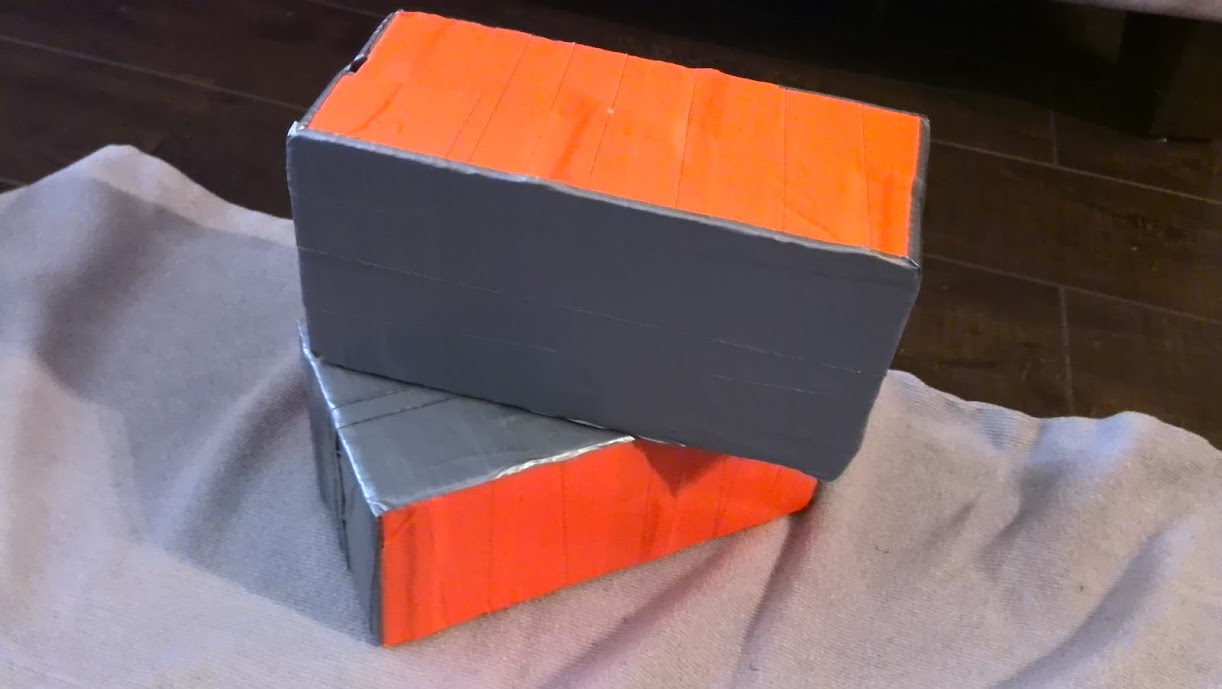 Finally, wrap in something soft. 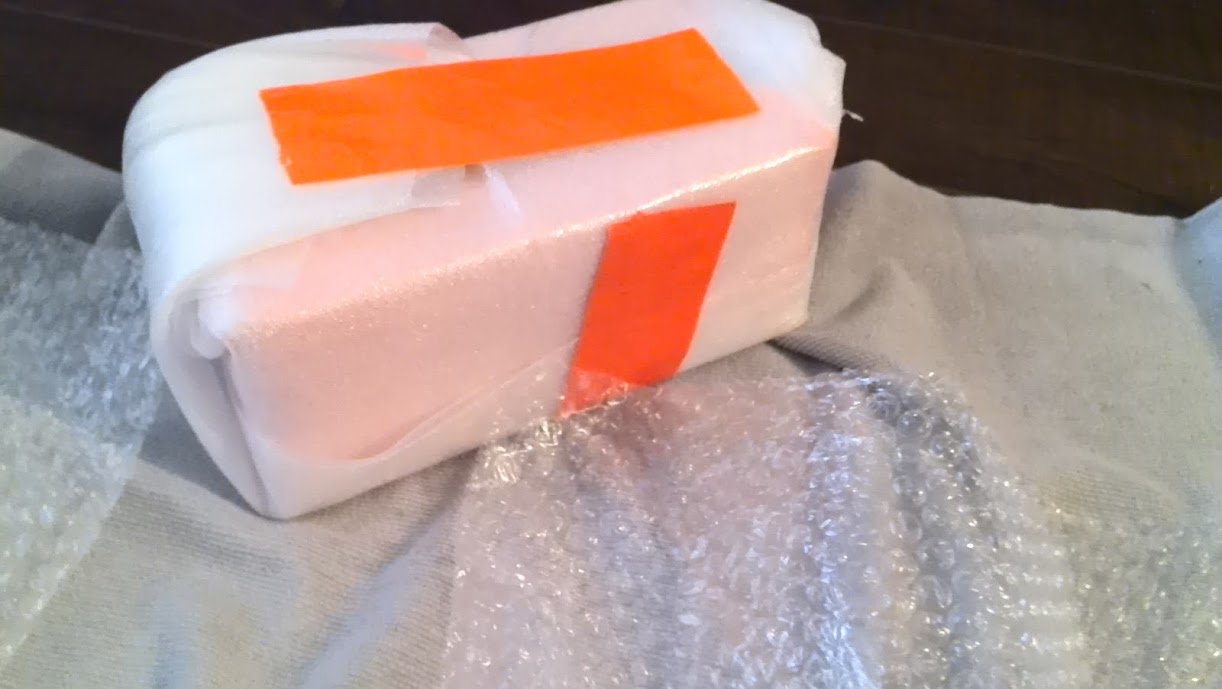 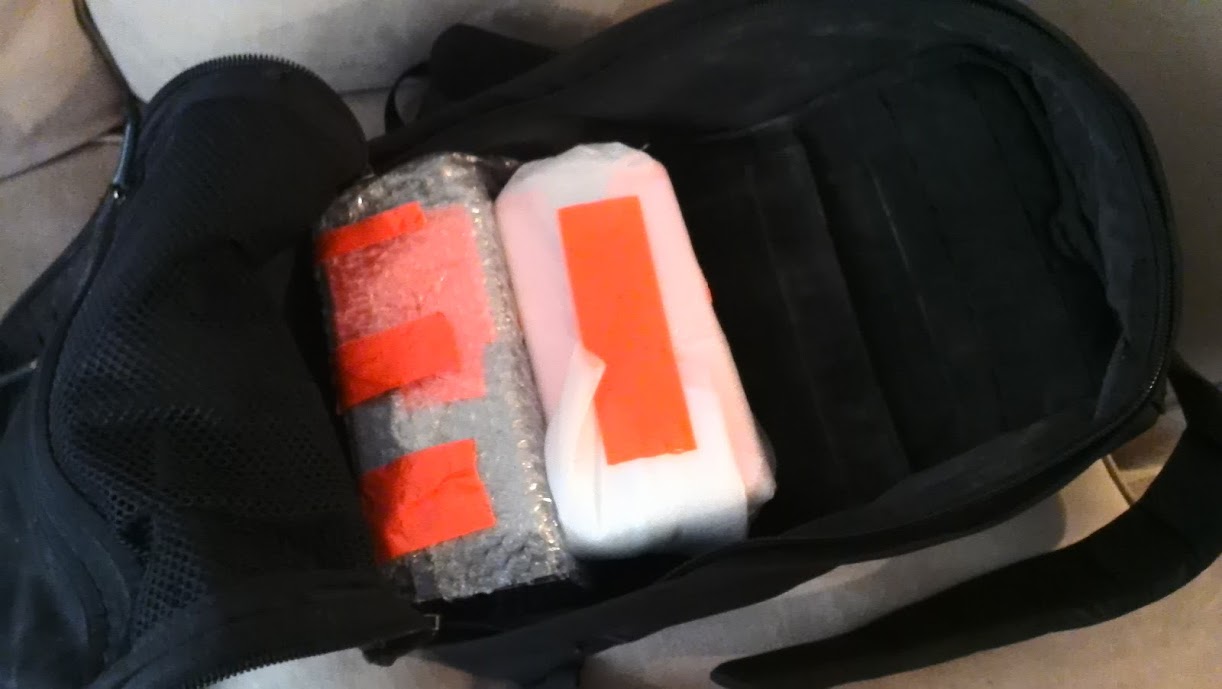 Collecting other gear only takes minutes – it seems I do this every other weekend or so… Practice makes perfect.

Then it is on to food. To keep things interesting, I decided this will be my first endurance event without gels – real food only. 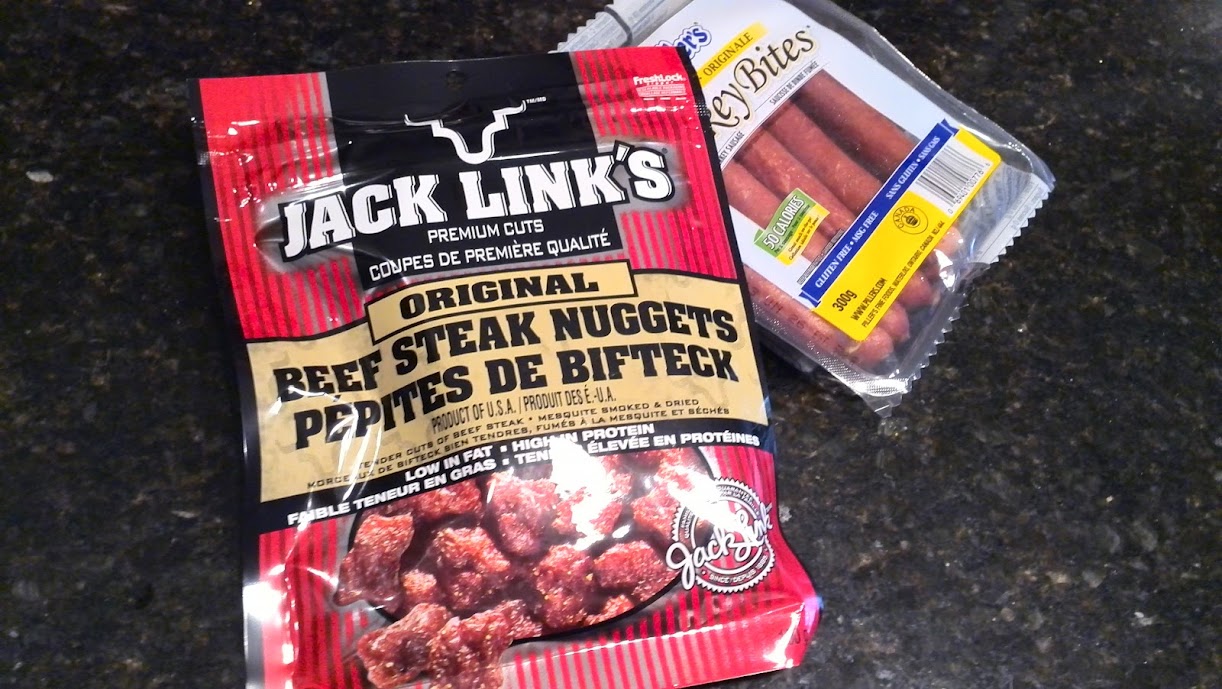 Shut up – it’s really good! (And low in fat!!! MUST be good for you!). I’ll post a more complete report on all the real food goodies I packed in another blog.

Stony and Jay, two other team members were scheduled to arrive around 11pm, and so at  9pm I crawled into bed, hoping for some shut eye. No such luck – my mind was racing for the full hour, and then it was time to get up. Cup of coffee, and my last sit down meal until tomorrow.

There is a festive feel to the evening, as we meet a couple of Goruck alumni at a local bar for a warm-up pint.

We create quite a disturbance, entering the bar with heavy packs, Goruck flag, face paint, and team weight. The disturbance will perhaps be more obvious once you see our team weight:

This baby was lovingly put together, painted, wrapped and stuffed full of essential nutrients = barley, water, hops and yeast, by Stony, the car maker. 30 pounds of hardcore.

Check out the whole process – it is quite surreal!

Seemingly the coldest damn place in the whole city – it’s open and windy. We meet fellow strangers all wearing backpacks. Three of us have done a Goruck before, the rest are Goruck virgins. Spartan Race virgins earned a name Sparkle. I’m not sure if there is an actual term for Goruck yet. Gor-gins? Ummm… maybe not.

A bunch of no-shows. Fourteen of us start. After roll call, we head down to the field. I’m expecting PT (physical training), followed by PT, and probably a little bit more PT after that.

What really got me is the unexpected amount of PT.

We form up. The initial count results in one extra person. Huh? We do the count again. Same thing again. It takes us few minutes to realize that Dutch, Stony’s 11-year old son, is lined up with us. He’s here with mom for moral support, and not only these troopers stay up until 3am, but Dutch actually sticks with us.

So yeah… Up the hill. Bring the weight. Come back. Face the punishment.

“Into the puddle!”, Jason is livid. We look over at the “puddle” – a little pond in the middle of the field formed due to all the rain we’ve been getting lately seems to deserve a more fitting name.

We get into the puddle, which is about knee deep, get into plank and start doing donkey kicks. “This is way too early to get wet”, I think to myself, all the while trying to preserve as much of my top half dry as possible.

By the time we get out,  some people’s teeth are already chattering. Four laps around the track do not seem to help.

A typical barrage of push-ups and burpees. I try to maintain some sort of resemblance of good form, while not loading the wrist too much. One of the guys starts to cramp. “Way too early to cramp”, I think. “Not a good sign”.

An hour or so later, we pick up our stuff, and head out towards a small beach nearby. “Well, that wasn’t so bad”, I think to myself.

As we approach the bridge, the instructions are to low crawl. I get a brief flashback to SERE Challenge in NYC. But guess what? It’s not February, and this is not Brooklyn Bridge. I could do this all night. I’m at the end of the line, and Dutch is crawling right behind me.

As we reach the beach, into the water we go. “Stay behind, little man”, Cadre says to Dutch. Dutch seems disappointed. Maybe next year?

I’ll be honest I was kinda hoping to be done with water for a while. We are thigh deep. Squats in the water. Burpees in the water. Donkey kicks in the water. Knee highs… you guessed it – in the water.  The water is not actually too cold (again, thank you February + SERE Challenge for setting the bar for cold water high), but wow, you’d be surprised how much sand you get into your shoes, doing knee highs in the water.

As we do burpees, I desperately try not to actually drink too much (thank you India and mother Ganga for setting the bar for water cleanliness low… I swam in the Ganges and lived, how bad could this be?).

We finally get out of the water, and head back to the track. On the way over, Jonathan, the same teammate who started cramping earlier, gets accidentally hit with the team weight, and falls down. I actually hear the sound of the metal hitting his head. It’s an awful sound – way up there with the sound of a hamstring being torn. Few minutes later, already on his feet, he starts throwing up. After an assessment by cadre, we have our first drop. And then there were 13…

[Jonathan got medical attention and checked in with the group later – he is ok, and will be attempting Goruck again!]

We are back on the same damn field, running laps. If you think we had a chance to get the sand out of the shoes, you are wrong. I have about two inches of sand in my shoes, and I barely drag my butt as the sand is ever so gently exfoliating the skin off the bottoms of my feet. From looking at me, you wouldn’t think I can actually run. A thought flashes through my mind: “I won’t be able to do this all night…”.

As we get a minute between exercises, I try to shake out the sand out of the shoes, one by one, but my hands are frozen, and I can’t feel my fingers. Good luck manipulating shoelaces and shoes without full use of your fingers. Team to the rescue. Right foot, (the other) Jonathan gets rid of the sand, and helps me to shove the foot back into the shoe. Few minutes later, left foot – Stony does the same. Whew. Better.

It is really early into the event, and we already wet and cold. I think if I knew at this point how much more wet and cold it was gonna get, I’d quit right there. Ignorance really is bliss.

It’s only a matter of minutes (hours? who knows) before we piss off Cadre again. What did we do this time? I don’t even remember. I think we failed to move with “a sense of urgency”. My favorite borrowed expression from the night.

“Back to the puddle! You are going to crawl across on your stomach!!!”

I swear I almost quit right there. I think the only thing that stopped me was knowing that my article “In pursuit of DNF” was coming out later that week – I kinda already had my sights set on DNF-ing a specific event. This was not it.

We crawl across the puddle. TWICE. As we failed to deliver the sense of urgency again the first time around. The water is bearable. It’s never really about the water itself. It’s about what happens after the water – wet clothes, chattering teeth, not being able to warm up… for hours. The sunrise is still oh-so-far-away.

Next up… wheelbarrow walking. Weighted, of course, as we are all wearing out rucks during the exercise. This is a moment of truth. There is absolutely no way I can do this with my wrist. This would be tough on ANY wrist. Now add 40 pound backpack, and torn cartilage.

I approach cadre. “Load me up and let me run circles around the track or something”, I say. I don’t care how much to carry. But if I do this, my wrist is done.” He nods and hands over the 30-lb team weight. I am to lunge with this weight in front of the team, who takes turns holding up each other’s feet in wheel barrow, and doing crab walks. Not exactly fair, as I’m sure many of my teammates would love to switch with me. I, on the other hand, would love to be able to do the damn wheelbarrow.

After what seems like hours of wheel barrow (and lunging) we do another lap around the track for good measure, alternating between bear crawl and lunges.

A fairly sizeable hill is only a brief jog away. I’m actually relieved. Hills. With weight. This I can do. This does not involve a wrist. And this will keep us warm. Or at least warm-er. At least ten hill climbs are interspersed with dozens of 8-count burpees. The team is struggling – quads are on fire, some are really winded, and many are starting to cramp up. Once again, I am a freaking Angel of Salt. Magic pills to the rescue! We re-distribute the rucks, hold hands, and cheer each other on up that damn hill.  Unfortunately, Ariel, one of the few women on the team drops out due to a recurring injury which rears its ugly head. Those who quit have to stand in front of the team and deliver that message. That part is probably tougher than quitting itself. And then there were 12…

We have a ten minute break. This is one of those times when priorities become very clear. I’m hungry, but it’s all about warmth right now. I spend most of the precious time, changing socks and wrapping a foil emergency blanket around myself. I still can’t feel my fingers, so this is taking longer than it should. With one minute to spare, I stuff a peanut butter wrap in my mouth. It’s not enough, but it would have to do.

As we take off, I tuck the blanket under my armpits, and slide a fleece over top. Cadre Jason gives me a quizzical glance. I look absolutely ridiculous, and the blanket crinkles loudly with every step. I do not care even for a split second. “There is nothing about this in the rules”, I assert, almost daring Jason to challenge me. “And I’m fully functional.” He shrugs, and nods. We are on the move.

When we finally leave the park, it’s almost morning. I know it, because I can hear the birds, but no sun yet. Once again, it’s race to see the morning. Everything is better when the sun comes up.