Crisp and chilly morning = perfect recipe for a winter race. We arrived with lots of time to spare, and found Burlington overrun with… well, runners. 🙂 I have been to this town a number of times for races, but never for this particular event, and it was definitely the biggest one yet.

Free parking was a nice touch. You could just see smiles on people’s faces, as they learned that they didn’t have to pay for parking. Not a big deal, but such a mood booster.

Free coffee for runners at the coffee shop nearby was also a nice touch. Overall, this race definitely lived up to the expectations. Run without a hitch. Like clockwork.

We take off shortly after 10am. I gently elbow my way through the crowd towards the 1:45 pacing bunny. The plan is to try and pace myself with this group. As we take off shortly after 10am, I take the edge of the road, running a pretty fast pace, until the crowd thins out a bit. The pacing bunny is somewhere behind me. I keep track of pace for the first couple of kilometers – the most difficult thing here is not to run too fast. It seems slow, but I need to settle into a pace that I can actually maintain for the full race. The most common mistake during longer races is to take off too fast, and “die” half way through.

At about 3km marker, I am getting too warm. After checking the weather this morning, I threw on another long sleeve shirt. Should have followed Coco Chanel’s advice on accessorizing: “Always take off the last thing you put on”. Unzip the jacket, and keep going.

Water and e-load at aid stations are mostly ice. Mmm… mmm… crunchy. I get couple of mouthfuls. Now, I’m actually getting pretty good at running through the stations. At one of them, I manage to get a paper cup with water, then reach into my pocket, get a gel, open a gel, squeeze most of it in my mouth, and wash it down with water. All while running. Not bad. Practice makes perfect.

My pace starts to seem pretty challenging around 11km marker. The 1:45 bunny and the little pack of runners around him catch up to me. I take a breath, and speed up, trying to keep them just behind my shoulder. Slight sense of panic here – we are only half way through, will I be able to keep this up for another 10km?

I pick a bright shirt in front of me. The guy’s purple top says: “Never forget”. Ok, this will work. I can keep myself busy trying to figure what the heck it is that I am supposed to never forget.

My favorite part of the out-and-back races is always approaching the turn-around, when elite runners are starting to come back. It’s just so inspiring and mesmerizing at the same time. I found myself picking up the pace, just watching them. Around kilometer 11 or 12, we start seeing the first runners sprinting back. The first two guys are pacing each other shoulder to shoulder. Then no one. For a while. Another pack of two or three athletes. Another pause. I count 27 male runners before spotting the first woman. She is flying.

The course is fairly flat, with some gentle rolling hills in the second half. When you are tired, even a slight incline is noticeable, however. I try not to slow down on an incline, and take advantage of even the slightest downhill by picking up the pace – these are free seconds off your time – just move your legs, and the downhill does the work for you.

I feel pretty strong throughout the race. In fact… I have never seen the kilometer markers fly by so quickly. Which probably signals that I could be running that much faster. I know that when I’m running all out in a 5k or a 10k, those markers simply cannot come fast enough. Every kilometer seems to be at least a mile long.

A team of firefighters is running this race in full gear. I spot one of the firefighters trudging along in front of me around 17km marker. The white letters on his butt spell out “Captain”. I smile to myself, picking up the pace – Captain Craig managed to keep me on pace, even without being there. Virtual nod from a friend. Awesome.

Even faster during the last kilometer. Familiar barfy feeling. Legs are starting to burn. I start passing runners. One. Two. Three. Faster. I see the finish line, and book it, passing at least five or more six people right at the finish, and literally flying past the timing rubber mat, and landing in an embrace from the Italian. “Two hours, eh?”, he says, smiling. “You know you suck at these things, right?”. 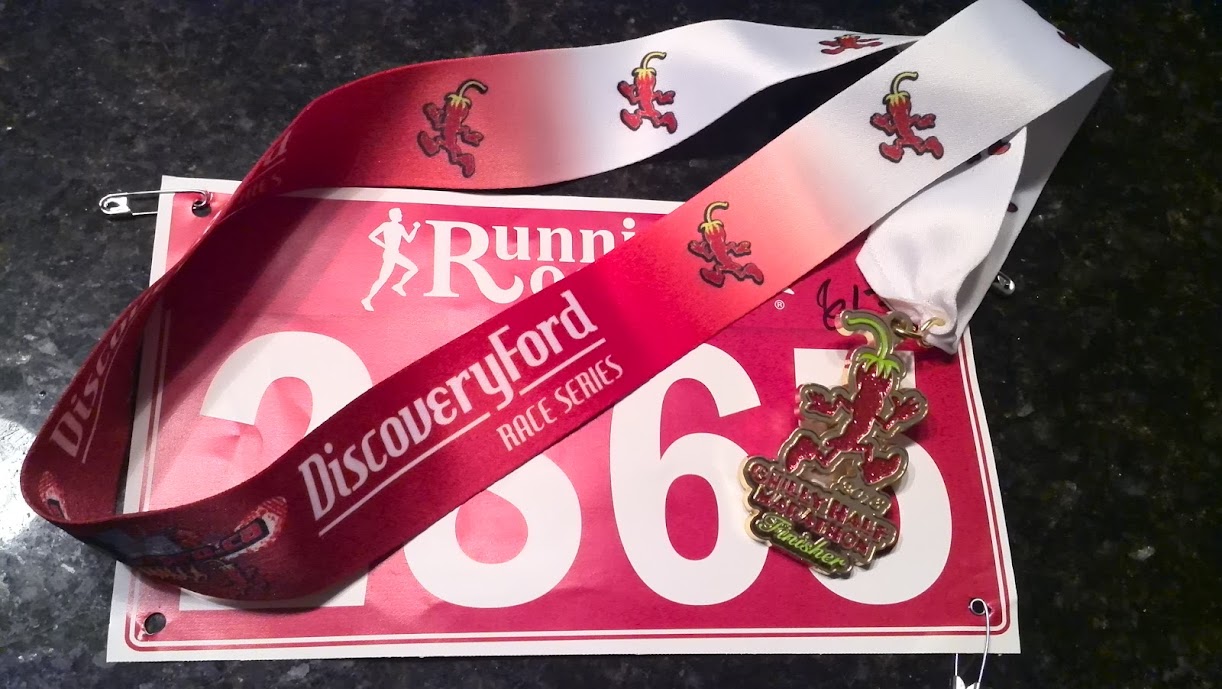 After the race, free chili and beer are served at 7 or 8 local restaurants. The approach proves to be very effective, as multiple locations ensure no bottleneck at any one place. I finish a bowl of chili, and head towards the Performing Arts Centre for a massage provided by massage therapy students.

I found that free massages available after races tend to be pretty hit-and-miss. In general, you get what you (don’t) pay for. Usually, it’s a pretty tame 10-15 minute session, which is just enough to get your legs moving. Today’s treatment reminded me of making out with a 16-year old (if memory serves) – little bit all over the place, lacking confidence and finesse to be effective, and generally, leaving you mildly dissatisfied and mostly confused. In the middle of shaking and stroking, I half expected my (female) masseuse to reach out for my buttock, squeeze, and say “honk-honk”. However, I firmly believe that massage is like pizza, even when it’s bad, it’s still pretty good.

Oh, and the front of that guy’s shirt said: “My mom is a hero. Never forget”.

Leaving you with my ultimate racing song…

“‘Cause sometimes you just feel tired,
Feel weak, and when you feel weak, you feel like you wanna just give up.
But you gotta search within you, you gotta find that inner strength
And just pull that shit out of you and get that motivation to not give up
And not be a quitter, no matter how bad you wanna just fall flat on your face and collapse.

I will not fall,
I will stand tall,
Feels like no one can beat me.”