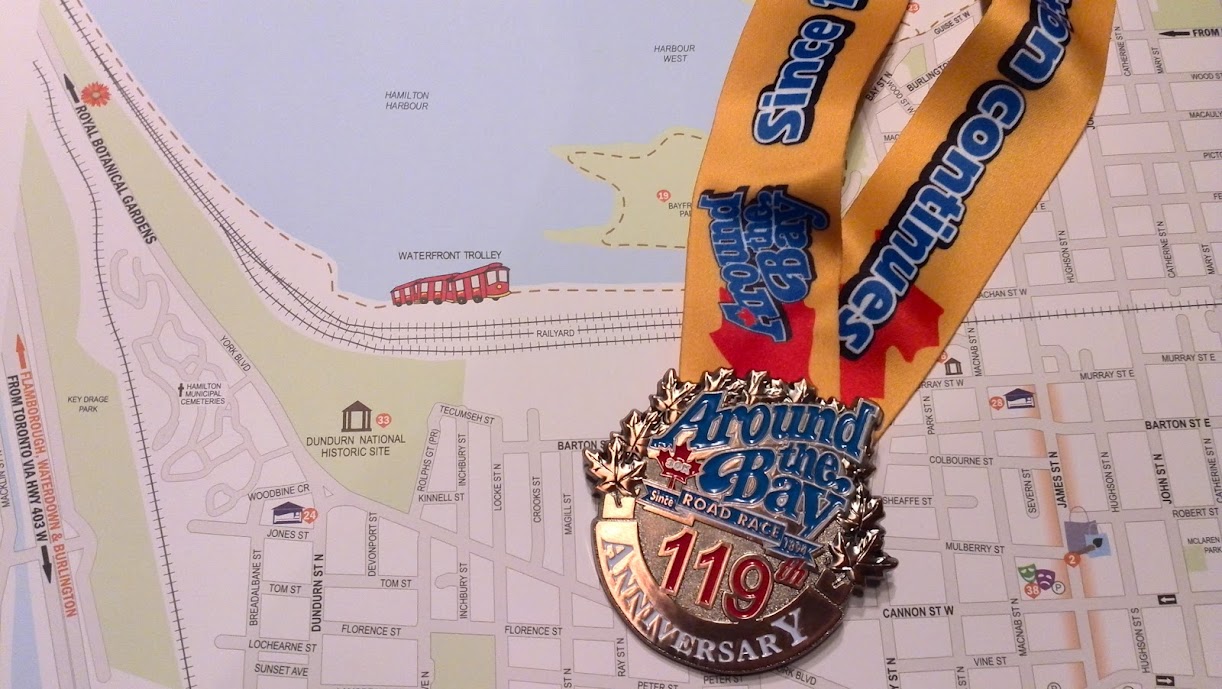 I wake up in a panic and glance at the clock. It’s 5am. I just had a nightmare about missing the race. Not the first time I had one of those dreams the morning of the event. Ha! Missing a 30K run = my idea of nightmare?

Breakfast = egg sandwich, hunk of bread with peanut butter, coffee. My bag is packed – recovery drink, change of clothes. My hydration pack is stuffed with gels. Italian is in charge of directions and driving. Whew.

Around the Bay is one of the biggest events for Hamilton. It is also North America’s oldest road race, older than Boston with the first race taking place on Christmas Day in 1894. Around here, it’s kind of a big deal… Over 10,000 people show up this morning, and the traffic is noticeable.

I’m in the throes of pre-race anxiety. Stupid road races. Stupid 30k. Whose idea was this anyway? I mean who RUNS 30k? That’s like… a lot.

Pee stop. Another pee stop. We finally park, and head to the start line. I need to pee. Ok, seriously? “You just need to start running”, Italian says. He’s right. At this point, I just need the freaking start gun to go off.

I start out slow as usual, glancing down at my watch, as hundreds of people overtake me. 30km. 30km. The distance really messes with my head. I have covered at least a marathon distance multiple times previously, but it has always been over many hours, and usually with obstacles in between, and a backpack (or a person) on my back. I’ve never run that long on pavement in one stretch. .

It’s a sunny day, and I am thankful for the sunglasses. In fact, about a kilometer in, I realize that I’m too warm. Again. Ugh – being a wimp about the cold really interferes with proper layering.

There is a sign. “Everything I’ve ever wanted to know about myself, I learned in a 30k race”. There is another thing I realize about a kilometer in. As I see that first marker, I realize that this is not a 30km race (any more). It’s a 29km race. Well, gee – that does not sound nearly as threatening. I take a breath.

2km. “A 28km race!” I think to myself. And so begins the internal dialogue. If you’ve never had an imaginary friend, start running long distances. Solo. You will have one in no time.

3km. First aid station. I stop, take off my running jacket and stuff it into my hydration pack. Whew. So much better. Lost about one minute – but so worth it.

Half an hour passes. “Ok, you have good pace”, I tell myself. “ You just have to keep this up for two more hours.”

Ugh. No, that doesn’t help.

We pass a bus stop with ad for the local radio station. “Funny FM. We are your second favorite radio station. Because being first is too much pressure.” Yeah, that sounds about right.

I run without music for the first half of the race – my little $15 mp3 player bought at Walmart runs out of juice too quickly, and I decide some beats would be more helpful in the second half of the race.

“I thought there were supposed to be half naked firefighters too?”, I continue.

“Wrong race again”, they snicker. I’m referring to the Toronto Women’s Half Marathon, of course. That one takes place in a few weeks and is known for candy AND eye candy at aid stations.

“Wait, do we at least get wine at water stations?”, I ask hopefully. “Nope”, they laugh, and I charge ahead. Not here… but at Marathon du Medoc in France (where else?), runners are offered wine at 23(!) drinking stations along the course.

Still no music. My pathetic attempts at banter with fellow runners fall so flat, I can hear them bounce off the pavement.

“So,” I nod at a closest runner. “How much time do we have before they start sweeping the course?”. We are only about 8 or 9km in, and are running at a very decent pace. “Umm…”, he looks over his shoulder, making sure I’m talking to him, then glances at his watch. “I don’t think you need to worry about that. You’ll be done way before.”

We run by some poor animal hit by a car. “Wow”, I try again, addressing another runner to make right. “Can you imagine how fast you have to run to actually do that?”. I point towards roadkill. ‘That wasn’t you, was it?” He eyes me suspiciously and shakes his head no.

We are running through the streets of Hamilton lined with family and friends of the runners. Many locals came out for support too, sitting on their patios, verandas and lawn chairs. Two girls, approximately 5 and 7, are sitting in front of their house, and are waving at runners. Very serious wave, almost methodical. I wave back. As soon as I do, one of the girls looks down and marks me down in a notepad. That makes me smile. I think I just became a part of a social experiment – I wonder if I passed or failed.

There is a turn coming up, and it’s crowded with supporters. A couple is holding up a poster, reading “Ur all winners!”.  Suddenly a runner passes me, and runs up to the couple, screaming “A typo! You made a typo!”, and laughing maniacally runs off.

Ok. Really??? Of all people, I am a freaking language dork and grammar police rolled up in up. Even I think this is too much. Umm… They are here to support you! Hello?

Dear roadies… I love you to death, but you guys take yourselves way too seriously. I give up.

We are now into the second half, and I blast my music. Linkin Park is really angry about something. Evanescence is weepy. Ugh. I really gotta start planning my running playlist better.

“You better lose yourself in the music, the moment
You own it, you better never let it go”,

The course is not as scenic, as the name would have you believe. I kind of expected to be running around the edge of water. But there was very little view of water. In fact, the prettiest parts of the course lie through residential areas. However, all the support we get on course more than makes up for that.

I get choked up around kilometer 18, reading someone’s sign: “I’m so proud of you, complete stranger!”. We run by a DJ table. We run by a couple who is standing beside a cooler, offering runners beer. Now there’s an idea! Few local businesses set up tents with huge bowls of cut up bananas and oranges.

In the last ten kilometers, rolling hills begin. I think endorphins have kicked in, because at this point I’m giddy. Wheeeee!!! I sprint downhill with my arms spread wide, then it’s a slow crawl to the top.

We run past a cemetery. Another one. And another. Sharp downhill, followed by a steep climb, wreaths and tombstones all around, this stretch is affectionately known as the Death Valley.

“Snap back to reality, Oh there goes gravity…”

Talk about an existential reminder of your own mortality. Bah. “Now there are hundreds of people who cannot run at all… Let alone 30k.”, I remark cheerfully to myself.

Perhaps, fittingly shortly after the Death Valley, we expect to spot the Grim Reaper. Yes, yes, the actual Grim Reaper. Full get up. Face paint and all. He appears at the race every year. “When you see Grim Reaper, the end is near!”, a sign reads. I think I’m tired, ‘coz I don’t actually get it until after the race.

It’s a flat stretch of pavement – about 3km left – leading straight into Coliseum, the local stadium and the finish line, when I finally spot him. He is standing in the middle of the course, handing out high fives. As I run up, I give him a huge hug instead. He’s trying not to smile, looking into my eyes – our faces are only few inches apart. “You know you are not going to make it, right?”, he asks. I see a hint of a grin through the white paint. “I’m gonna try anyway”, I laugh with a shrug, and run off.

“Look, if you had one shot, or one opportunity
To seize everything you ever wanted in one moment
Would you capture it or just let it slip?”

I pick up the pace in the last two kilometers and start passing people. This race probably has one of the most epic finish lines, as we run into the crowded stadium, like a professional sports team. Everyone is cheering.

Do you know what it’s like to run 30km? Not to complete it, but to actually run it, with steady energy, without crashing or cramping, with a smile on your face, giving people hugs along the way, and without having to stop?

It feels fucking amazing, that’s how. It feels strong. It feels like I could move mountains.